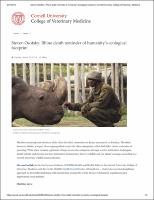 This news item is about: The last remaining male northern white rhino has died, researchers in Kenya announced on Tuesday. The rhino, known as Sudan, was part of an ongoing effort to save the rhino subspecies, which had fallen victim to decades of poaching. While there remains a glimmer of hope to save the subspecies through in vitro fertilization techniques, Sudan’s death underscores just how destructive humans have been to wildlife and our planet's ecology, according to a Cornell University wildlife conservationist.