Separation of the Exchange-Correlation Potential into Exchange plus Correlation: an Optimized Effective Potential Approach 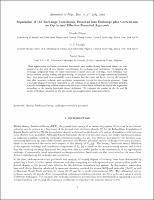 Most approximate exchange-correlation functionals used within density functional theory are constructed as the sum of two distinct contributions for exchange and correlation. Separating the exchange component from the entire functional is useful since, for exchange, exact relations exist under uniform density scaling and spin scaling. In the past, accurate exchange-correlation potentials have been generated from essentially exact densities but they have not been correctly decomposed into their separate exchange and correlation components (except for two-electron systems). Using a recently proposed method, equivalent to the solution of an optimized effective potential problem with the corresponding orbitals replaced by the exact Kohn-Sham orbitals, we obtain the separation according to the density functional theory definition. We compare the results for the Ne and Be atoms with those obtained by the previously used appromixate separation scheme.