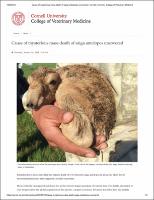 This news item is about: Scientists have discovered that the sudden death of over 200,000 saiga antelopes in 2015 was likely due to environmental factors that triggered a deadly bacterium. These critically endangered antelopes live in the remote steppe grassland of Central Asia. The deaths amounted to over 60 percent of the global population of the species. A paper in Science Advances describes how the healthy animals died of blood poisoning caused by the Pasteurella multocida bacterium. The mass deaths occurred while they were calving.