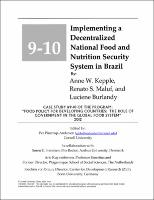 Case Study #9-10 of the Program: ''Food Policy For Developing Countries: The Role Of Government In The Global Food System''

Brazil entered the new millennium with a stabilized economy and a better-nourished population enjoying greater access to health care and education than in the past. Economic growth and a strong government commitment to decreasing poverty and inequality during the first decade of the 2000s made it possible for Brazil to anticipate achievement of the Millennium Development goal of reducing extreme poverty by half by 2015 (CONSEA 2009a, b), with a concomitant 25 percent decrease in the prevalence of hunger (IBGE 2010a). A major factor in these advances was the Zero Hunger strategy, composed of an integrated set of actions spanning 19 ministries and secretariats, with poverty alleviation serving as one key aspect of a much broader approach to promoting food and nutrition security. Aiming to consolidate the gains of the past decade, the president of Brazil signed a presidential decree in August 2010 outlining directives for the development of a National Food and Nutrition Security Plan and other steps necessary to implement the National Food and Nutrition Security System, founded on decentralized policy implementation and decision making. More than two decades of social mobilization to fight hunger and a constitutional commitment to decentralized decision making, combined with the concerted effort on the part of government and civil society during the past decade, have laid the groundwork for a decentralized food and nutrition security system. The federal government's intersectoral approach and close collaboration with the National Council on Food and Nutrition Security (CONSEA), an advisory council with a direct institutional link to the executive branch and broad representation from civil society as well as key government sectors and programs, has proven to be a successful model at the federal level. The challenge now is to replicate this model at the state and local levels, define responsibilities of the three levels of government, and find the right balance of inducements and obligations. The presidential decree charges an interministerial governmental body with formulating the first National Food and Nutrition Security Plan, followed by the promotion of state and municipal food and nutrition security plans. Although the federal government is committed to decentralized control and recognizes that too many rules and regulations can interfere with the flexibility needed to adapt to local political-institutional arrangements, it requires instruments to fulfill its mandate to implement the law and monitor actions at the local level. What directives and instruments would you recommend be included in the national plan to meet this challenge?

15 pp.©Cornell University, Ithaca, New York. All rights reserved. This case study may be reproduced for educational purposes without express permission but must include acknowledgment to Cornell University. No commercial use is permitted without permission.