Food Safety: The Case of Aflatoxin 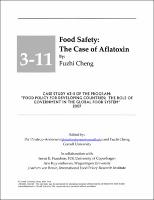 Case Study #3-11 of the Program: ''Food Policy For Developing Countries: The Role Of Government In The Global Food System''

Naturally occurring toxins such as aflatoxins pose profound challenges to food safety in both developed and developing countries. The knowledge that aflatoxins can have serious effects on humans and animals has led many countries to establish regulations on aflatoxins in food and feed in the past few decades to safeguard public health, as well as the economic interests of producers and traders. A wide range of aflatoxin standards and corresponding regulatory requirements exist worldwide, illustrating the drastic differences in risk perceptions among different countries. In general, more stringent aflatoxins standards are found in wealthy industrialized countries with more developed market economies than in developing countries where subsistence farming still prevails. Countries in the European Union (EU) have historically had the most stringent regulations for aflatoxins in the world. Their newly adopted harmonized aflatoxin standards have set tolerance levels much lower than those in the developing countries and the Codex Alimentarius. The setting of aflatoxin regulations is a complex activity that involves many factors and interested parties. For developed countries, increased food safety standards have long been associated with higher income, but for developing countries, considerations such as food security and trade benefits are often of particular concern. When food supplies are limited and alternative diets are not possible, stringent regulatory measures to lower aflatoxin contamination may put extra burdens on the country’s food system and lead to food shortages and higher prices. In a global context, since the perception of tolerable health risks are not likely to converge among different countries, trade disputes over regulatory requirements on aflatoxins are likely to persist. To minimize the risk of aflatoxin contamination and ensuing trade frictions, private and public investments are needed to promote process-based guidelines such as Good Agricultural Practices (GAPs) before harvest and good manufacturing practices (GMPs) after harvest. Meanwhile, efforts to facilitate transfer of technology and technical assistance from the developed to the developing countries in meeting food safety standards are necessary. Aflatoxin regulations raise a number of important questions and considerations. Because higher standards on aflatoxins emanate primarily from the developed world, different views exist on their implications for food safety in the developing countries. In the trade arena, questions on whether there should be or could be a global harmonization of aflatoxin regulations are debated. Given that the regulatory limits and standards concerning the accepted limits of aflatoxins (and mycotoxins in general) in food and feed products will continue to differ across countries and regions, your assignment is to recommend policy changes for the following three groups when their food safety regulations are in conflict with each other: the EU, the developing countries, and parties involved in the Sanitary and Phyto-Sanitary Standards (SPS) of the World Trade Organization (WTO) or the Codex Alimentarius (harmonized standards).