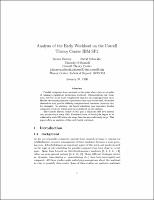 Parallel computers have matured to the point where they are capable of running a significant production workload. Characterizing this workload, however, is far more complicated than for the single-processor case. Besides the varying number of processors that may be invoked, the nodes themselves may provide differing computational resources (memory size, for example). In addition, the batch schedulers may introduce further categories of service which must be considered in the analysis. The Cornell Theory Center (CTC) put a 512-node IBM SP2 system into production in early 1995. Extended traces of batch jobs began to be collected in mid-1995 when the usage base became sufficiently large. This paper offers an analysis of this early batch workload.