Niger's Famine and the Role of Food Aid 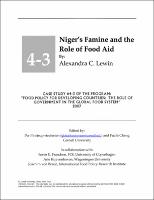 Case Study #4-3 of the Program: ''Food Policy For Developing Countries: The Role Of Government In The Global Food System''

Since the mid-1970s Niger has suffered from political instability and corruption. Following a 1996 coup, the World Bank and International Monetary Fund (IMF) worked with Niger to implement various structural adjustment programs, but nearly 10 years later, in 2004–2005, the country faced a food crisis. One-third of Niger's population suffered from high levels of food insecurity and vulnerability. Yet the food crisis gained little media coverage; the government of Niger denied the country was even faced with a food crisis and continued to claim that food shortages were normal for this country. As the crisis progressed, Niger did receive aid, yet efforts to improve the situation did not help. Many blamed the situation in Niger on donor countries—their delay in sending assistance and their lack of overall assistance. Others blamed the structural adjustment programs of the World Bank and International Monetary Fund, and most found at least some fault with the Nigerien government. The food crisis in Niger evolved into one of the largest food crisis “blame games.” Numerous challenges arise as policymakers try to craft a common solution appropriate for all stakeholders. In an analysis of what happened in Niger and why food aid was so ineffective, many central themes emerge. Corrupt governance was one issue, as was the timeliness of food aid. Food aid arrived too late; it then became available at the time of Niger's harvest, depressing market prices of Niger's staple foods. The United Nations, then, must examine how to most effectively target the neediest populations and how to best access assistance for these emergencies. In addition, one cannot separate the food crisis from the chronic poverty that exists in the country. Poor infrastructure, Niger's geographic position as a landlocked country, and low agricultural productivity remain a challenge to the overall health of the region. Many policy options exist for the donor countries, international institutions, and the government of Niger. Such options include improving the United Nations' Central Emergency Revolving Fund, establishing a Global Food Aid Compact, and reforming the Nigerien government (including implementing the country's poverty reduction strategy). Such steps can help prevent future crises and help alleviate the suffering of the people of Niger. Your assignment is to develop a set of policies that will satisfy the main stakeholder groups.