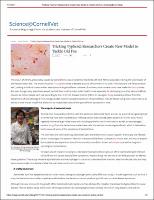 This blog post is about: The plague of Athens, presumably caused by typhoid fever, was an epidemic that killed a third of Athens’ population during the second year of the Peloponnesian war. The ancient historian Thucydides wrote a detailed account of this event in his book “The history of the Peloponnesian war”, making it the first known written description of a typhoid fever outbreak. Since then, other notable cases have made the history books. But even though many years have passed, typhoid fever is still a major public health threat especially for developing countries, where it affects close to 22 million people each year according to the Center for Disease Control (CDC). Dr. Jeongmin Song, assistant professor from the Department of Microbiology & Immunology, studies how the causative bacterium of typhoid fever induces disease using a cell culture set-up as well as a novel mouse model that allows her to recapitulate many of the typhoid fever symptoms in mice.