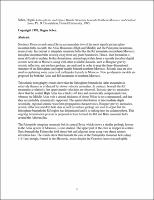 Northern Morocco and central Syria accommodate two of the most significant intraplate mountain belts on earth: the Atlas Mountains (High and Middle) and the Palmyride mountains, respectively. In contrast to interplate mountain belts like the Rif mountains in northern Morocco, intraplate mountain belts develop away from any plate boundaries. Hence, their formation is more difficult to explain. In this dissertation, seismological data from a recently installed digital seismic network in Morocco along with other available datasets, such as Bouguer gravity, seismic reflection, and surface geology, are analyzed in order to map the three-dimensional structure of the lithosphere and upper mantle beneath northern Morocco. Seismic data are also used in explaining some aspects of earthquake hazards in Morocco. New geodynamic models are proposed for both the Atlas and Rif mountains of northern Morocco. Teleseismic tomography results show that the lithosphere beneath the Atlas mountains is relatively thinner as evidenced by slower velocity anomalies. In contrast, beneath the Rif mountains a relatively fast upper mantle velocities are observed. Isostatic gravity anomalies show that the central High Atlas has a thick (~45 km) and isostatically compensated crust, whereas the Middle Atlas with a crustal thickness of about 30 km is not compensated, and that they are probably dynamically supported. The spatial distribution of intermediate-depth seismicity, regional seismic waveform propagation characteristics, Bouguer gravity anomalies, seismic reflection and drill hole data as well as surface geology are used to argue that the lithosphere beneath the Rif region has delaminated and it is sinking into the asthenosphere. This ongoing delamination process is proposed to have formed the Rif and Betic mountain belts around the Alboran Sea. The Palmyride intraplate mountain belt in central Syria, which shows a similar geologic history to the Atlas system of Morocco, is also studied. The upper part of the crust is mapped in central Syria beneath the Palmyrides fold-thrust belt and adjacent areas using very dense seismic refraction data. The results show that beneath the axis of the Palmyrides mountain belt a deep (~11 km) trough, formed in the Mesozoic, exists despite the Cenozoic inversion and uplift.