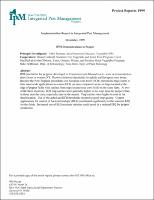 IPM procedures for peppers, developed in Connecticut and Massachusetts, were demonstrated on three farms in western NY. Growers followed thresholds for aphids and European corn borer. Because the New England procedures use European corn borer (ECB) pheromone trap counts to time insecticide applications to control ECB, we also compared catches in traps located at the edge of pepper fields with catches from traps located near corn fields on the same farm. At two of the three locations, ECB trap catches were generally higher in the traps near the peppers than in those near the corn, especially later in the season. Trap catches were higher in corn at the third location. Use of the aphid and ECB thresholds resulted in good crop quality. Copper applications for control of bacterial leafspot (BLS) contributed significantly to the seasonal EIQ for the fields. Increased use of BLS resistant varieties could result in a reduced EIQ for pepper production.