How Parallel Programming Tools are Used 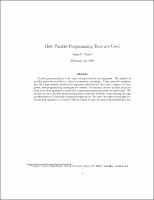