Do the Poor Pay More? 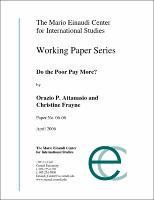 We study the prices of basic commodities that are relatively homogeneous (rice, carrots, beans) in some rural communities in Colombia. We identify the existence of considerable price differences within the same geographic clusters. Unlike the existing literature, we do not interpret them as reflecting differences in the quality of the commodities. Instead, we argue that some of them reflect bulk discounting. In particular, using an instrumental variable approach, we identify a relationship between price paid and quantity purchased. We argue that such a relationship identifies a price schedule available to consumers in these villages. The effects we uncover are substantial and are obtained after controlling for a variety of confounding factors, including village fixed effects and the distance from the town centre and markets. The discounting is substantial, even for a basic staple such as rice. As poor households are more likely to buy small amounts (a fact that we document), we argue that poor households do pay more.