Coping With Disaster: The Impact of Hurricanes on International Financial Flows, 1970-2002 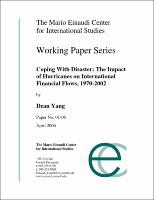 How well do countries cope with the aftermath of natural disasters? In particular, do international financial flows help buffer countries in the wake of disasters? This paper focuses on hurricanes (one of the most common and destructive types of disasters), and examines the impact of hurricane exposure on resource flows to developing countries. Using meteorological data on storm paths, I construct a time-varying storm index that takes into account the fraction of a country’s population exposed to storms of varying intensities. Across developing countries, greater hurricane exposure leads to large increases in foreign aid. For other types of international financial flows, the impact of hurricanes varies according to income level. In the poorer half of the sample, hurricane exposure leads to substantial increases in migrants’ remittances, so that total inflows from all sources in the three years following hurricane exposure amount to roughly three-fourths of estimated damages. In the richer half of the sample, by contrast, hurricane exposure stimulates inflows of new lending from multilateral institutions, but offsetting declines in private financial flows are so large that the null hypothesis of zero damage replacement cannot be rejected.