The Making of the North Korean State 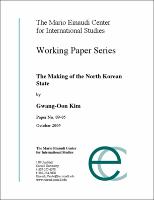 While North Korea’s official history emphasizes the indigenousness and autonomy of the North’s state formation process, and while scholars outside present the North as a satellite or a puppet, this paper takes the middle ground and argues that the North’s regime formation is best understood as the outcome of the interactions between Kim Il-Sung led communists and the Soviet occupation forces. The North Korean government of the mid to late 1950’s criticized Soviet interference as ‘modern revisionism’ and set a principle of “let’s do things our way.” The Soviet Union criticized the North Korean measures as “anti-Soviet” and “promotion of nationalism,” but the North Korean government was finding its own ideology, theory, and methods. North Korea decided to “not live today for today, but to live today for tomorrow.” The North Korea also diverged significantly from the USSR and China, especially in its party structure and its leadership system. As a result, North Korea had a unique system different from those of other Eastern European socialist states. The historical process of the North’s state formation shed light on why it did not collapse with Eastern European states or the Soviet Union.