An MPEC Approach to Inverse Pricing of American Options: The Case of an Implied Volatility Surface 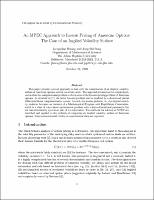 This paper presents a novel approach to deal with the computation of an implied volatility surface of American options written on a risky asset. The approach is based on the simple observation that this computational problem is the inverse of the forward pricing problem of American options. As detailed in [17], the latter forward problem can be modeled by a discretized partial differential linear complementarity system. As such, the inverse problem, i.e., the implied volatility problem, becomes an instance of a Mathematical Program with Equilibrium Constraints, which is a class of constrained optimization problem with a finite-dimensional parametric linear comlementarity system as part of its constraints. Two methods for solving an MPEC are described and applied to the problem of computing and implied volatility surface of American options. Some computational results on experimental data are reported.