No Turkish Delight: The Impasse of Islamic Party Politics in Indonesia 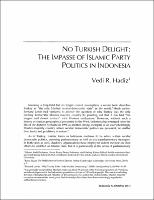 This article addresses the inability of Indonesia’s Islamic parties to launch a serious challenge for control over state power through insights obtained via comparisons with the Turkish case. By juxtaposing Indonesia’s PKS (Partai Keadilan Sejahtera, Justice and Prosperity Party) and Turkey's AKP (Adalet ve Kalk?nma Partisi, Justice and Development Party), in particular, it offers a political economy-oriented understanding of the limited achievements of Islamic party politics in Indonesia. The analysis places Islamic party politics in Indonesia and Turkey in the context of social-structural changes associated with capitalist development. It argues that, unlike the AKP, the PKS remains predominantly identified with an urban middle-class constituency rather than a cross-class alliance waging struggles under the Islamic banner.