"Pirates or Entrepreneurs?" The Migration and Trade of Sea People in Southwest Kalimantan, c. 1770-1820 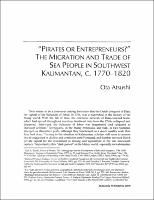 Around 1800, an increasing number of Sea People (Bugis, Malay, Iranun, and others) migrated to the coastal areas of Southwest Kalimantan. They played an important role in the economic transformation of the region because they promoted the exportation of increasingly diversified products for the China market, such as birds’ nests, sea cucumbers, and eaglewood, as well as importing various Indian textiles and other foreign items. Local states became increasingly dependent on these maritime entrepreneurs, who have often been characterized, too simply, as “pirates.”