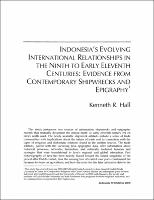 This study pairs the evidence of recently recovered ninth- and tenth-century shipwrecks with contemporary temple reliefs, archaeological remains, and inscriptions to address the importance of international maritime trade, as it set in motion societal transitions in ninth- and tenth-century Java. Negotiated settlements documented in the tenth-century inscriptions established networked relationships among merchant diaspora, concentrated metalworkers in “urban” production centers, and prompted Java monarchs to legally contain these acculturating commercial “foreigners” in their own administered downstream domains.