The State and the Reactor: Nuclear Politics in Post-Suharto Indonesia 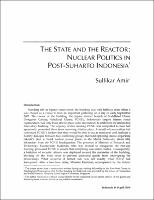 In the wake of its energy crisis, Indonesia has decided to develop nuclear power to fulfill soaring demands for electricity. The rationale for going nuclear, this study argues, resides not in potential technical or economic advantages, per se, but, more importantly, in the desire of the state to assert its power over society. Nuclear politics is highly relevant to understanding the nature of the post-Suharto state in relation to ongoing contemporary democratic transitions. By delving into the politics of nuclear power in post-Suharto Indonesia, and the conflicts between the technological elites who support the construction of nuclear power plants and the organizations that actively oppose such construction, this study examines how technology shapes state–society relations in post-authoritarian Indonesia.