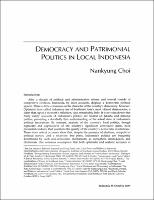 There is little consensus on the character of the Indonesia’s democracy. One common assumption that both optimistic and realistic accounts of Indonesia’s politics share is the implicit or explicit suggestion that Indonesia’s polity is at least quite stable. Through an analysis of recent elections in two localities, Depok and Banyuwangi, this essay suggests that Indonesia’s formal democratic institutions remain vulnerable to patrimonial manipulation in the context of an increasingly competitive and oligarchic struggle for decentralized power and governance.