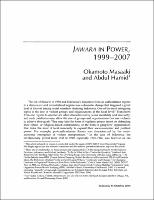 This essay discusses the rise of violent social actors called Jawara and limitations that have tended to restrict their influence in newly established Banten province, located in western Java. Post-New Order democratization and decentralization have opened a wider space for these thugs, and they have taken advantage of this development to gain socioeconomic and political power at the local level. But in Banten, as the central government has reasserted control and democratization has taken effect and deepened, the political power of the thugs has gradually more state-entrenched. As a result, local politics have turned more stable and less violent in recent years.