Statement by Ong Hok Ham, Djakarta, September 4, 1967, with and introduction by Ruth McVey 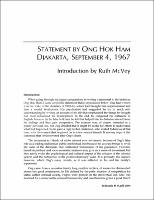 An autobiographical statement written by Ong Hok Ham, Indonesian historian, describing his childhood and his perceptive, tormented reaction to the political turmoil and massacres of purported communists in 1965–66 in Indonesia. When he protested the killings, he was imprisoned and eventually suffered a mental breakdown. The statement was written in response to a request from his doctor.