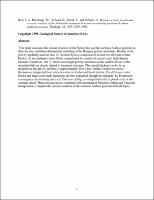 This study examines the crustal structure of the Palmyrides and the northern Arabian platform in Syria by two- and three-dimensional modeling of the Bouguer gravity anomalies. Results of the gravity modeling indicate that: (1) western Syria is composed of at least two different crustal blocks, (2) the southern crustal block is penetrated by a series of crustal-scale, high-density intrusive complexes, and (3) short-wavelength gravity anomalies in the southwest part of the mountain belt are clearly related to basement structure. The crustal thickness in Syria, as modeled on the gravity profiles, is approximately 40 +/- 4 km, which is similar to crustal thicknesses interpreted from refraction data in Jordan and Saudi Arabia. The different crustal blocks and large-scale mafic intrusions are best explained, though not uniquely, by Proterozoic convergence and suturing and early Paleozoic rifting, as interpreted in the exposed rocks of the Arabian shield. These two processes, combined with documented Mesozoic rifting and Cenozoic transpression, comprise the crustal evolution of the northern Arabian platform beneath Syria.