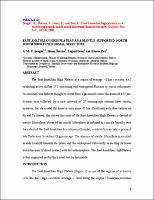 The East Anatolian High Plateau is a region of average ~2 km elevation a.s.l. exhibiting active diffuse N-S shortening and widespread Pliocene to recent volcanicity. Its elevation was hitherto thought to result from a presumed crustal thickness of +/- 55 km. Seismic data collected by a new network of 29 seismograph stations have shown, however, that its crustal thickness is only some 45 km. Combined with observations on Pn and Sn phases, this shows that most of the East Anatolian High Plateau is devoid of mantle lithosphere. Areas of no mantle lithosphere are inferred to coincide broadly with the extent of the East Anatolian Accretionary Complex, a subduction-accretion prism of late Cretaceous to earliest Oligocene age. The absence of mantle lithosphere is ascribed to breakoff of northward subducted slab beneath the prism and the widespread vulcanicity to melting its lower levels because of direct contact with hot asthenosphere The East Anatolian High Plateau is thus supported not by thick crust, but by hot mantle.