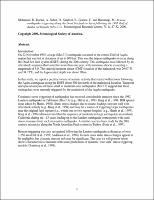 On 22 November 1995, a large (Ms=7.3) earthquake occurred in the central Gulf of Aqaba region that was felt at distances of up to 600 km. This was the largest earthquake to occur along the Dead Sea fault system (DSFS) during the 20th century. This earthquake was followed by an aftershock sequence that lasted for more than one year, with numerous shocks exceeding a magnitude of 5.0. The centroid moment tensor (CMT) location of the mainshock was 29.07?N and 34.73?E, and the hypocentral depth was about 18km. In this study, we report a peculiar swarm of seismic activity that started within hours following the Aqaba earthquake along the DSFS about 500 km north of the mainshock location. Temporal and spacial analyses of these small to moderate-size earthquakes (M<3.7) suggest that these earthquakes were remotely triggered by the mainshock of the Aqaba earthquake. Coseismic stress triggering of earthquakes has received considerable attention since the 1992 Landers earthquake in California (Ms=7.3) (e.g., Hill et al., 1993; King et al., 1994; JGR special issue edited by Harris, 1998). Static stress changes due to elastic loading correlate well with aftershock activity (e.g., King et al., 1994) and may be a source of triggering larger earthquakes near the original fault rupture (i.e., within one or two rupture lengths) (e.g., Harris et al., 1997). King et al. (1994) demonstrated that the sequence of moderate to large earthquakes in southern California during the ~15 years leading up to the Landers earthquake corresponds with static stress increases from each successive earthquake. A similar case has been made for the 20th century seismicity along the North Anatolian Fault system in Turkey (Stein et al., 1997). Remote triggering was also recognized following the Landers earthquake at distances of over 1,250 km (Hill et al., 1993; Anderson et al., 1994). In such cases static stress changes appear to be negligible, but dynamic stresses still may be significant. The case we will present below shows characteristics consistent with some predictions of dynamic "rate state" stress triggering models (Gomberg et al., 1998).