Coseismic displacements along the Serghaya Fault: An active branch of the Dead Sea Fault System in Syria and Lebanon 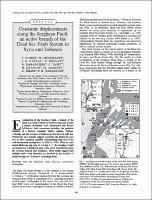 Examination of the Serghaya fault, a branch of the Dead Sea Fault System in western Syria and eastern Lebanon, documents Late Quaternary and Recent left-lateral fault movements including the probable remnant of a historic coseismic surface rupture. Carbon-14 dating and the presence of fault-scarp free faces in soft, late Pleistocene lake deposits suggest coseismic slip during the past two or three centuries, possibly corresponding with one of the well-documented earthquakes of 1705 or 1759. With an estimated Holocene slip rate of 1-2 mm/yr, the Serghaya Fault accommodates a significant part of the active deformation along the Arabian-African plate boundary. These results suggest that multiple active fault branches are involved in the transfer of strain through the 'Lebanese' restraining bend.