Simulating the Impacts of Agroterrorism on U.S. Financial Markets and Regional Economic Performance 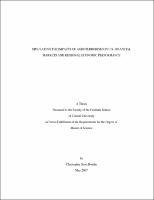 The threat of terrorism against the United States has been a primary concern of public policy makers, particularly after the attacks of September 11, 2001. Economic theory and statistical analysis provide valuable insights into the challenge of estimating the regional and national economic impacts of future attacks. Terrorist events represent exogenous shocks on the economy which can cause significant emotional and psychological damage. The initial chapters describe a simulation model that captures the impacts of agricultural terrorism (agroterrorism) on the economic performance of various sectors within a regional economy, while the final chapters examine the impacts of agroterrorism on U.S. financial markets. I begin the analysis by examining the probable direct and indirect economic impacts of bioterrorism originating in St. Lawrence County, New York. The specific biological weapon examined is a foot-and-mouth disease (FMD) attack that disrupts the local agricultural food supply. A county-level simulation is valuable because it focuses on the immediate impact of FMD, providing useful estimates of the short-to-medium term impacts. The regional model contains in depth analysis of the livestock industry with specific links to regional tourism, and the results section includes impact estimates using a Social Accounting Matrix (SAM) framework. St. Lawrence County serves as an interesting case study to explore supply-chain linkages, since the region depends heavily on its livestock and tourism industries which would suffer following an FMD attack. I perform simulations assuming that the attack has no direct impact on dairy farm products, before relaxing this assumption to account for economic impacts associated with parallel shocks to the livestock and dairy industries. The methodology focuses on estimating the economic implications of production and trade disruptions in the international market. The costs of agroterrorism are estimated in terms of disruptions to regional output, employment, and value added for key sectors within the economy. I provide impact assessments for livestock, tourism, dairy, and all sectors within the region. The direct costs of the attack within the region would reflect the initial output reductions, and the indirect costs would reflect changes in inter-industry transactions as supplying industries react to falling demand from the directly affected industries. Indirect effects significantly increase the magnitude of losses suffered by the economy as the damage flows beyond the industries directly impacted. These indirect effects would include losses suffered by related industries, such as firms engaged in food supply, transportation, distribution, and retail. The firm-level impacts are outside the scope of this research project. The latter chapters explore the broader impacts on financial asset classes in equities, fixed income, and foreign exchange to produce real GDP growth rate forecasts using the Global Insight macroeconomic model of the U.S. economy. By linking to the macro model following the regional analysis, we can examine the economy-wide repercussions of a terrorist attack on U.S. agriculture. I will show that a state of financial uncertainty brought forth by terrorism can decrease consumer confidence, increase interest rates, increase credit spreads, dampen the stock market, and impact the value of the U.S. dollar relative to the currencies of trading partners. I will demonstrate that extreme terrorist events tend to disrupt the normal relationships among financial asset classes. The results section for the macro impact model includes real GDP growth rate forecasts and projected real output losses. For both the regional and national models I draw on the literature to examine the attack under various assumptions regarding the severity of output reductions. I conclude with policy recommendations based on my findings, as well as directions for future research.