Regional discrimination of chemical explosions and earthquakes: A case study in Morocco 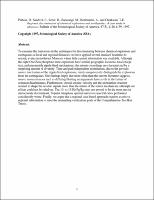 To examine the limitations in the techniques for discriminating between chemical explosions and earthquakes at local and regional distances, we have applied several standard heuristics to seismic events in northwest Morocco where little a priori information was available. Although the eight Oud Zem phosphate mine explosions have similar geographic locations, total charge size, and presumably ripple-fired mechanisms, the seismic recordings are characterized by a surprising amount of diversity. Time and path independent modulations, due to the periodic source mechanism of the ripple-fired explosions, rarely unequivocally distinguish the explosions from the earthquakes. Our findings imply that more often than the current literature suggests, source inconsistencies such as differing blasting arrangements have a role in the failure of common discriminants. Furthermore, crustal seismic velocity and the attenuation structure seemed to shape the seismic signals more than the nature of the source mechanism, although site effects could not be ruled out. The 10- to 15-Hz Pg/Sg ratio test proved to be the most precise and accurate discriminant. Popular intraphase spectral and cross-spectral ratios performed considerably worse. Finally, we argue that a regional case-based approach requires extensive regional information to meet the demanding verification goals of the Comprehensive Test Ban Treaty.