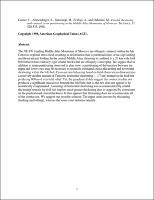 The NE-SW trending Middle Atlas Mountains of Morocco are obliquely oriented within the late Cenozoic regional stress field, resulting in deformation that is partitioned into strike-slip faulting and thrust-related folding. In the central Middle Atlas, thrusting is confined to a 20 km wide fold belt between two relatively rigid crustal blocks that are obliquely converging. We suggest that in addition to strain partitioning observed in plan view, a partitioning of deformation between the upper and lower crust may be necessary to reconcile estimated crustal thickening and horizontal shortening within the fold belt. Cross-section balancing based on field observations demonstrates a relatively modest amount of Cenozoic horizontal shortening (~ 4.7 km) normal to the fold belt producing 800 m of structural relief. Yet, the geophysical data suggest this contraction has not produced a significant crustal root beneath the fold belt; that is, the belt does not appear to be isostatically compensated. Assuming all horizontal shortening was accommodated by crustal thickening beneath the fold belt implies much greater thickening than is suggested by constraints on the preshortened crustal thickness. It thus appears that thickening does not accommodate all of the contraction. We suggest one possible solution: The upper crust shortens by thickening (faulting and folding), whereas the lower crust deforms laterally.