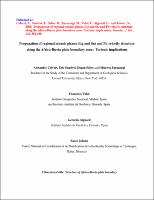 We used over 1000 regional waveforms recorded by 60 seismic stations located in northwest Africa and Iberia to map the efficiency of L g and Sn wave propagation beneath the Gulf of Cadiz, Alboran Sea and bounding Betic, Rif and Atlas mountain belts. Crustal attenuation is inferred from the tomographic inversion of L g/Pg amplitude ratios. Upper mantle attenuation is inferred from maps of Sn propagation efficiency derived by inversion of well-defined qualitative efficiency assignments based on waveform characteristics. Regions of L g attenuation correlate well with areas of thinned continental or oceanic crust, significant sedimentary basins, and lateral crustal variations. Comparison of the Sn efficiency results with velocities obtained from an anisotropic Pn traveltime inversion shows a fairly good correlation between regions of poor Sn efficiency and low Pn velocity. A low Pn velocity (7.6?7.8 km s-1) and significant Sn attenuation in the uppermost mantle is imaged beneath the Betics in southern Spain, in sharp contrast to the relatively normal Pn velocity (8.0?8.1 km s-1) and efficient Sn imaged beneath the Alboran Sea. Slow Pn velocity anomalies are also imaged beneath the Rif and Middle Atlas in Morocco. We do not identify any conclusive evidence of lithospheric-scale upper mantle attenuation beneath the Rif, although the crust in the Gibraltar region appears highly attenuating, making observations at stations in this region ambiguous. Paths crossing the Gulf of Cadiz, eastern Atlantic and the Moroccan and Iberian mesetas show very efficient Sn propagation and are imaged with high Pn velocities (8.1?8.2 km s-1). The spatial distribution of attenuation and velocity anomalies lead us to conclude that some recovery of the mantle lid beneath the Alboran Sea must have occurred since the early Miocene episode of extension and volcanism. We interpret the low velocity and attenuating regions beneath the Betics and possibly the Rif as indicating the presence of partial melt in the uppermost mantle which may be underlain by faster less attenuating mantle. In the light of observations from other geophysical and geological studies, the presence of melt at the base of the Betic crust may be an indication that delamination of continental lithosphere has played a role in the Neogene evolution of the Alboran Sea region.