Crustal model for the Middle East and North Africa region: Implications for the isostatic compensation mechanism 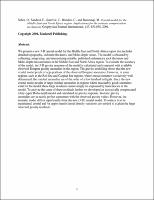 We present a new 3-D crustal model for the Middle East and North Africa region that includes detailed topography, sediment thickness, and Moho depth values. The model is obtained by collecting, integrating, and interpolating reliable, published sedimentary rock thickness and Moho depth measurements in the Middle East and North Africa region. To evaluate the accuracy of the model, the 3-D gravity response of the model is calculated and compared with available observed Bouguer gravity anomalies in the region. The gravity modelling shows that the new crustal model predicts large portions of the observed Bouguer anomalies. However, in some regions, such as the Red Sea and Caspian Sea regions, where crustal structure is relatively well-determined, the residual anomalies are of the order of a few hundred milligals. Since the new crustal model results in large residual anomalies in regions where reasonably good constraints exist for the model, these large residuals cannot simply be explained by inaccuracies in the model. To analyze the cause of these residuals further we developed an isostatically compensated (Airy-type) Moho-depth model and calculated its gravity response. Isostatic gravity anomalies are in nearly perfect agreement with the observed gravity values. However, the isostatic model differs significantly from the new (3-D) crustal model. If isostasy is to be maintained, crustal and /or upper mantle lateral density variations are needed to explain the large observed gravity residuals.