Geophysical and geological databases and CTBT monitoring: A case study of the Middle East 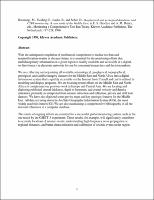 With the anticipated completion of multilateral comprehensive nuclear test ban and nonproliferation treaties in the near future, it is essential for the monitoring efforts that multidisciplinary information on a given region is readily available and accessible in a digital, on-line format via electronic networks for use by concerned researchers and decision makers. We are collecting and organizing all available seismological, geophysical, topographical, geological, and satellite imagery datasets for the Middle East and North Africa into a digital information system that is quickly accessible via the Internet from Cornell and can be utilized in modeling and display programs. We are focusing recent efforts on the Middle East and North Africa to complement our previous work in Europe and Central Asia. We are locating and digitizing published crustal thickness, depth to basement, and crustal velocity and density structures, primarily as interpreted from seismic refraction and reflection, gravity and drill hole datasets. We have also digitized some gravity maps and key geologic features for the Middle East. All data are being stored in Arc/Info Geographic Information System (GIS), the most widely used full-featured GIs We are also maintaining a comprehensive bibliography of all the relevant references in a computer database. The results of ongoing efforts are essential for a successful global monitoring system, such as the one tested by the GSETT-3 experiment. These results, for example, will significantly contribute to accurate locations of seismic events, understanding high-frequency wave propagation at regional distances, and better characterization and calibration of seismic events in the region.