View Item
JavaScript is disabled for your browser. Some features of this site may not work without it.
eCommons user survey
In anticipation of a significant software upgrade, the eCommons team invites you to participate in a brief survey.

Effects of a Government-Academic Partnership: Has the NSF-Census Bureau Research Network Helped Secure the Future of the Federal Statistical System? 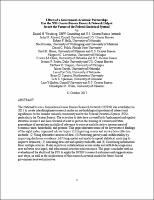 The National Science Foundation-Census Bureau Research Network (NCRN) was established in 2011 to create interdisciplinary research nodes on methodological questions of interest and significance to the broader research community and to the Federal Statistical System (FSS), particularly the Census Bureau. The activities to date have covered both fundamental and applied statistical research and have focused at least in part on the training of current and future generations of researchers in skills of relevance to surveys and alternative measurement of economic units, households, and persons. This paper discusses some of the key research findings of the eight nodes, organized into six topics: (1) Improving census and survey data collection methods; (2) Using alternative sources of data; (3) Protecting privacy and confidentiality by improving disclosure avoidance; (4) Using spatial and spatio-temporal statistical modeling to improve estimates; (5) Assessing data cost and quality tradeoffs; and (6) Combining information from multiple sources. It also reports on collaborations across nodes and with federal agencies, new software developed, and educational activities and outcomes. The paper concludes with an evaluation of the ability of the FSS to apply the NCRN’s research outcomes and suggests some next steps, as well as the implications of this research-network model for future federal government renewal initiatives.