PROGRESA: An Integrated Approach to Poverty Alleviation in Mexico 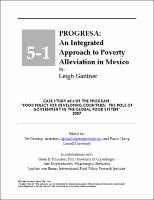 Case Study #5-1 of the Program: “Food Policy For Developing Countries: The Role Of Government In The Global Food System”

In 1997 the government of Mexico implemented PROGRESA (Programa de Educación, Salud, y Alimenación), an integrated approach to poverty alleviation through the development of human capital. PROGRESA was one part of a larger poverty alleviation strategy, and its role was to lay the groundwork for a healthy, well-educated population who could successfully contribute to Mexico’s economic development and break the intergenerational cycle of poverty. The program offered conditional cash transfers to the rural poor in exchange for sending their children to school and for regular attendance at health clinics and pláticas (small group sessions focusing on health and nutrition education). The conditional cash transfers replaced many earlier programs focused on poverty alleviation through the delivery of food subsidies and other in-kind transfers, which for political and logistical reasons often did not reach the rural poor in great numbers and were largely regarded as inefficient. The conditional cash transfers were demand-driven interventions that sought to remove many of the practical barriers and opportunity costs rural families faced in attending health clinics and sending their children to school (for example, children were often taken out of school to earn income for the family). The program sought to work with program beneficiaries and enable them to take responsibility for their own family’s welfare.Overall, the program was found to be quite successful in improving conditions of the poor. Owing to an emphasis on evaluation from the program’s inception, the program design and data collection strategies have allowed for extensive documentation of these successes. For instance, attendance in secondary school has increased by more than 20 percent for girls and 10 percent for boys in beneficiary households. PROGRESA children had a 12 percent lower incidence of illness than non-PROGRESA children. PROGRESA increased the number of prenatal visits in the first trimester of pregnancy by 8 percent. Food expenditures in PROGRESA households were 13 percent higher than in non-PROGRESA households, with PROGRESA households consuming higher-quality foods and more calories. PROGRESA children aged 12–36 months were on average one centimeter longer than non-PROGRESA children of similar ages.PROGRESA was not, however, without its challenges and disappointments. Although school attendance improved, school performance lagged behind. Concerns were raised about the increased workloads of teachers and health professionals, as well as rural women, who bore many new responsibilities in the program. The new organization of PROGRESA (requiring the collaboration of several agencies) also raised new political and organizational challenges at the national and state level, and PROGRESA (now called Oportunidades) faces the ongoing challenge of maintaining program consistency and sustainability until all program objectives are met during continually changing political times.The government of a developing country would like to initiate a poverty alleviation program similar to PROGRESA. What suggestions to improve the program would you make?

©Cornell University, Ithaca, New York. All rights reserved. This case study may be reproduced for educational purposes without express permission but must include acknowledgment to Cornell University. No commercial use is permitted without permission.