The Labor Market Integration of Asylum Seekers in France 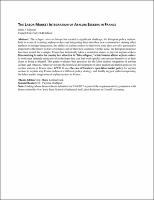 Undergraduate honors thesis submitted on 5/14/2017 as part of the requirements for graduation with honors from the New York State School of Industrial and Labor Relations at Cornell University.  [PDF]   (873.6Kb)