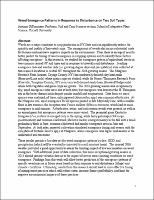 Weeds are a major constraint to crop production in NY State and can significantly reduce the quantity and quality of harvested crops. The management of weeds also incurs substantial costs for farmers and may have negative impacts on the environment. Thus, there is an urgent need to better predict the timing of weed emergence in cropping systems and to identify those factors affecting emergence. In this research, we studied the emergence pattern of agricultural weeds in two common central NY soil types and in response to biweekly soil disturbance. Seedling emergence data and weather data (i.e. growing-degree days and precipitation) were collected at two research locations in central NY throughout the 2016 growing season. The Musgrave Research Farm (Aurora, Cayuga County, NY) has moderately drained clay-loam soils (Honeyoe/Lima soils) where grain crops are studied, while the Homer Thompson Research Farm (Freeville, Tompkins County, NY) is on very well-drained sandy loam (Howard/Phelps soils) where both vegetable and grain crops are grown. The 2016 growing season was exceptionally dry; weed emergence rates were low at both sites, but emergence was lowest at the H. Thompson site in the better-drained soils despite similar rainfall and temperatures. Data from ten weed species were analyzed; of these, only pigweed (Amaranthus spp.) was common at both sites. At the Musgrave site, weed emergence for all species peaked in late May/early June, with a smaller flush in late summer; the exception was Venice mallow (Hibiscus trionum), which had its main emergence in mid-summer. At both sites, warm- and cool-season weeds were present, as well as an annual grass; but emergence patterns were more varied. The perennial grass Kentucky bluegrass (Poa pratensis) emerged only in the spring, while hairy galinsoga (Galinsoga quadriradiata) and common chickweed (Stellaria media) emerged mainly in the fall with a small preliminary flush in June; common chickweed had similar emergence rates in June and September. At both sites, repeated cultivation stimulated emergence during mid-season with the exception of foxtails (Setaria spp.) at Musgrave, where emergence was higher mid-season in the undisturbed soil treatment.