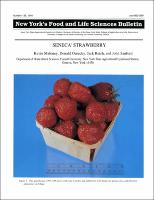 This new cultivar was developed by the small fruits breeding program of the Department of Horticultural Sciences, Cornell University, Geneva, NY, 14456. It was selected in 1976 from 243 progeny of a cross between NY 1261 x 'Holiday' (see figure 2). The cross was made in 1974. As a selection, it was tested as NY 1529. It was tested for many years in second test plots, and was evaluated in replicated yield trials in 1981 and 1982. It was further evaluated at numerous sites throughout the Great Lakes States by cooperative testers. In the fall of 1991, NY 1529 was publicly released as'Seneca'.