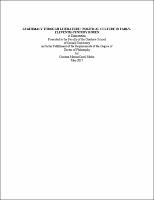 LEGITIMACY THROUGH LITERATURE: POLITICAL CULTURE IN EARLY-ELEVENTH-CENTURY ROUEN Corinna Maxine Carol Matlis Cornell University 2017 This dissertation examines the interplay between early-eleventh-century Norman literature and the Norman ducal family’s project of establishing its legitimacy to rule. The dissertation considers Dudo of Saint Quentin’s arcane history of the Norman dukes, Warner of Rouen’s two esoteric satires, and two further anonymous satires produced in Rouen c. 996-1026 (the reign of Duke Richard II). These works constitute the secular Norman literature during this period. Although the texts’ audiences are unknown, it is clear that the ducal family, local clerics, and potentially nobility throughout the region and France were among the works’ addressees. Despite their obscurity to modern readers, these texts spoke to the interests of the highest echelons of Norman society. Throughout my dissertation, I show how these texts were understood in their own time and how they spoke to contemporary social and political issues. Common themes emerge throughout the texts, despite their different genres: most importantly, the ducal family’s strategic marriages, and the desire for the appearance of a cultured court in order to balance the Normans’ reputation of physical might. Reading these Rouennais texts together offers new views of Norman political culture that have not been available without a close look at this literature as a whole. The literature should also be considered in the context of contemporary monastic and ecclesiastical reforms. The growing interest in ecclesiastical celibacy and other reforms influenced these texts, especially where they portray religious debates or satirical bawdiness, but the reforms’ influence in curtailing the production of secular texts in the late 1020s should not be overstated. Instead, it was political concerns that dictated the writing of the Rouennais literature and also dictated the end of its production. This dissertation’s methodology is to discuss the convergences and divergences in style, theme, and content of the texts in order to discuss the context in which the pieces were written. I combine this approach at times with evidence from diplomatic sources. This dissertation offers more evidence for a recent trend in Norman scholarship that sees the early-eleventh-century as a time of political consolidation for the Norman ducal family.