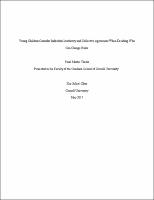 Young children demonstrate awareness of normativity in various domains of social learning. It is unclear, however, whether children recognize that rules can be changed in certain contexts and by certain people or groups. Across three studies, we provided empirical evidence that children consider individual authority and collective agreement when reasoning about who can change rules. In Study 1, children of 4 to 7 years old watched videos of children playing simply sorting and stacking games in groups or alone. Across conditions the group game was initiated 1) by one child, 2) by collaborative agreement, or 3) by an adult authority. In the group games with a rule initiated by one child, children attributed ability to change rules only to that individual and not his/her friends, and mentioned ownership and authority in their explanations. When the rule was initiated collaboratively, older children said that no individual could change the rule, while young children said that either individual could do so. When an adult initiated the rule children stated that only the adult could change it. In contrast, children always endorsed a child’s decision to change his own solitary play, and never endorsed any child’s ability to change moral and conventional rules in daily life. Age differences corresponded to beliefs about friendship and agreement in peer play (Study 2) and disappeared when the decision process behind and normative force of collaboratively initiated rules was clarified (Study 3). These results show important connections between normativity and considerations of authority and collaboration in early childhood.