FACTORS INFLUENCING THE MOVEMENT OF SOUTHEAST ASIAN FIGHTERS TO ISIS: A COMPARISON OF INDONESIA AND MALAYSIA 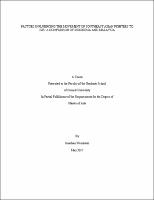 This thesis seeks to understand why Indonesia, the world’s most populous Muslim country with roughly 200 million followers, has sent relatively fewer fighters abroad to join the Islamic State in Iraq and Syria (“ISIS”, also known as the Islamic State in Iraq and the Levant or Daesh), or other violent groups in Iraq and Syria, when compared to Malaysia, a Southeast Asian regional peer with around 20 million Muslims. A precise assessment of the number of Southeast Asians fighting in Iraq and Syria is hard to make, but according to the Soufan Group’s December 2015 report “Foreign Fighters,” Indonesia has sent roughly 500 fighters to the Middle East, while Malaysia, with 1/10th as many Muslims, has sent around 100. That is roughly 2.5 Indonesian fighters per million and 5 Malaysian fighters per million (twice as many proportionally). The three plausible explanations addressed in this thesis are: (1) externalities of a strong state, (2) the influence of Arabization and (3) the availability of financial and language resources. The paper is focused on making judgments on patterns of behavior that the reader may find useful when looking at the issue of terrorism in Southeast Asia, as these explanations are meant to provide a foundation for understanding factors that likely influence Islamist violence in the aggregate.