Urban Planning and Cultural Identity in Pompeii: from the Altstadt to Vitruvius 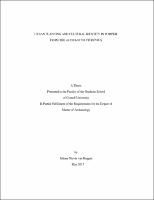 This thesis addresses the urban planning of Pompeii’s Altstadt, or oldest settlement, and its place in a larger narrative on Mediterranean urbanism. The first phase of this research utilizes Stephen Marshall’s techniques to quantify the Altstadt’s urban form, and implements additional architectural analysis to uncover the original street network. These techniques reveal that the ancient city utilized traditional grid forms but was forced to accommodate for irregular terrain. Oriented regardless of topography, its layout has a similar rotation to Vitruvius’s ideal city even though it predated De Architectura by five centuries. This specific orientation connects Pompeii’s urban development to that of other archaic cities around the Mediterranean. Because Pompeii’s culture is best defined as a triangulation of Greek, Etruscan, and Oscan, this research complicates previous assumptions that Vitruvius’ intellectual precursor was wholly Greek and questions the scholarly tendency of attributing strict cultural boundaries to various ancient practices.