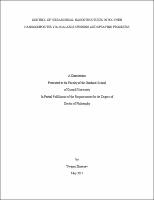 Over the past several decades, polymer nanocomposites have been of increasing scientific and industrial interest due to their potential applications in filtration, energy storage, and biomedical engineering. Although the addition of various nanofillers makes them viable for high-tech applications, the control of spatial distribution and orientation of functional nanoinclusions remains a great challenge. There is a plethora of methods for nanoparticle surface modification to improve the enthalpic interaction between the polymer matrix and the filler, but often it results in deterioration of catalytic, magnetic and electrical properties of the composites. Therefore, it is desirable to develop a reliable and scalable method for the control of dispersion of nanoinclusions in polymer nanocomposites, without compromising their fundamental properties. The work presented in this thesis aims to investigate the effect of additional extensional deformation provided by a sheath layer of controlled air flow during gas-assisted electrospinning (GAES) and air-controlled electrospray (ACES) on dispersion and spatial orientation of various nanoparticles in polymer matrix. Both spherical and anisotropic nanoparticles were employed in this study. First, we developed a robust post-process methodology to analyze transmission electron microscopy (TEM) images of microtomed longitudinal sections of nanoparticle-loaded PVA nanofibers, which provides a unique opportunity to investigate the details of the deformation-induced dispersion behavior. To demonstrate the material application perspective, we utilized GAES in the fabrication of a fibrous silicon anode material for Li-ion batteries, and observed a significant enhancement in both capacity and activity of active nanoinclusions at the same composition, which is attributed to improved dispersion. Coarse-grained molecular dynamics study confirms these experimental observations. We further extended our knowledge to conventional electrospray and novel air-controlled electrospray methods, to overcome the limitations due to non-uniform deposition and poor dispersion of fillers in functional coatings. Due to the precise control of atomization via extensional deformation and viscoelasticity, we successfully utilized new spraying processes for coatings with precisely controllable nanoscale topology, morphology, deposition thickness, and spatial distribution of unfunctionalized nanoinclusions. In order to demonstrate the industrial potential, we employed air-controlled electrospray for mass-production of micro/nano-scale encapsulates, and further fabrication of polymer composites with in situ indication of mechanical damage. Finally, to overcome scalability constraints and ensure viability for industrial utilization, we investigated a novel centrifugal spinning process. The focus was on the experimental visualization of the fluid flow and examination of the effects of viscoelasticity, polymer flow rate and driving force on the initial thinning and the contour shaper and radii of the polymer jet. High-speed camera imaging was utilized to visualize the flow of viscoelastic Boger fluid during centrifugal spinning process, and experimental results including intital jetting behavior were compared with the simulation results predicted by the discretized modeling. The current work provides an array of robust, economic and efficient single-step methods to fabricate hierarchical nanocomposites with controllable functionalities, topologies, morphologies, and spatial distribution of active nanoinclusions. The added benefit of experimental visualization and further comparison with computer simulation provides valuable insights and more rigorous understanding of the process. The successful advancement and utilization of these novel techniques will offer more comprehensive studies of nanocompsoites and lead to the next-generation functional materials.