THE FAVORITE ANIMAL: THE HORSE AS MINGQI IN HAN TOMBS 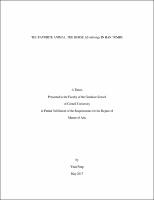 This thesis seeks to understand the horse’s societal roles in Han Dynasty China, especially its prevalence as mingqi (mortuary objects) in Han tombs. The Han Dynasty (206 BCE – 220 CE) was the second imperial dynasty of China. Scientific and philosophical inventions, advances in material culture, and exchanges with surrounding regions witnessed considerable development during this period. The breeding of horses saw a surge during the Han Dynasty, and the Han Chinese expressed their fervor for horses in many aspects of their lives, including burying live horses and horse figures with the deceased in tombs. The thesis examines the Han dynasty and its social and ideological background. It also uses archaeological evidence and literature texts to study the social functions of the horse in Han China, and the Han Chinese perceptions of the tomb, the afterlife, and mingqi. An analysis of a horse mingqi figure at the Johnson Museum of Art is also included. The thesis shows that the significance of the horse as a funerary item is closely related to the widespread use of horses in the daily life of the Han dynasty Chinese, from the elites to commoners, specifically in terms of transportation, military defense, and entertainment. Horses also were given mythical and symbolic meanings associated with the concept of the afterlife. These factors made the horse a part of the Chinese mingqi tradition and an important element of Chinese art, which explains the prevalence of horse figures in Han tombs.