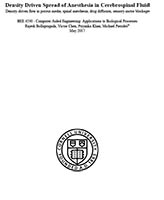 Intrathecal administration of anesthesia is performed for purposes of sensory and motor nerve blockage during surgeries to the abdomen and lower extremities. The spread of anesthesia is primarily based on the injection velocity, concentration, and density of the drug and determines which spinal nerves are blocked and the duration for which the block is maintained. As abdominal surgeries differ in the nerves that require blockage and the duration the block is required, the properties of the anesthesia, such as density, concentration, and injection velocity must be made unique for a given surgery to produce the optimal blockage for that procedure. Anesthesiologists refer to the density ratio of the anesthesia to the cerebrospinal fluid as the baricity. Hyperbaric anesthesia, which is more dense than cerebrospinal fluid, tends to diffuse downward in the direction of gravity. Hypobaric anesthesia, which is less dense than cerebrospinal fluid, tends to diffuse upward, against gravity. The baricity of anesthesia can be increased by the addition of dextrose and decreased by the addition of distilled water. While the baricity of the anesthesia affects its spread and the nerves that are blocked, the concentration of the drug affects the duration of blockage. In many cases, the degradation rate of intrathecal anesthesia is proportional to the concentration of the drug in the spinal canal and a higher concentration of the drug would increase the duration of blockage. However, the spread and dosage of anesthesia must be carefully monitored throughout the procedure as slight fluctuations in these parameters can put the patient at risk of cardiac complications such as hypotension, bradycardia, and potentially death. The density-driven spread and duration of blockage by the anesthesia bupivacaine were modelled with respect to its baricity, concentration, and injection pressure. The results demonstrated that hyperbaric anesthesia tended to diffuse in the direction of gravity while hypobaric anesthesia tended to diffuse against gravity. An objective function was also created that measured the harm the anesthesia did to the patient. The safe range of anesthesia concentrations was found to be 2.5 to 7.5 mg/mL. The optimum injection pressure was found to be 915,279 Pa, which is comparable to the pressure of injection. However, while baricity had a great effect on the spread of the drug, it appeared to have no noticeable effect on the block provided by anesthesia.