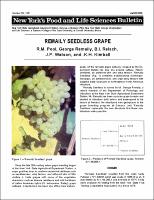 Since the late 19th century when grape breeding began at the New York State Agricultural Experiment Station, a major goal has been to combine certain fruit attributes such as seedlessness, crisp texture, and adherent skin of Vitis vinifera L. table grapes with some of the vegetative characters such as disease resistance and cold hardiness of native American hybrid (V. labruscana, Bailey) grape cultivars.