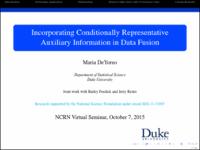 In data fusion analysts seek to combine information from two databases comprised of disjoint sets of individuals, in which some variables appear in both databases and other variables appear in only one database. Most data fusion techniques rely on variants of conditional independence assumptions, which can lead to unreliable inferences if this assumption is not satisfied. We propose a data fusion technique that allows analysts to easily incorporate auxiliary information (glue) on the dependence structure of variables not observed jointly. Using simulations, we illustrate the benefits of leveraging the information in glue. We also perform a data fusion experiment with the goal to fuse two surveys from the book publisher HarperCollins, using glue obtained from the Internet polling company CivicScience. Due to the convenience sampling nature of the auxiliary online survey, we find that the glue is not representative of the population sampled by HarperCollins. This is a scenario very likely to be encountered in practice, and points to the more general problem of combining information from multiple data sources that are not all probability samples of the same population. We discuss current work in this direction.

Research supported by the National Science Foundation under award SES-11-31897.