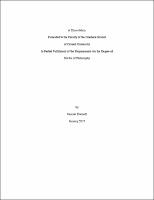 Focusing on British opera, this dissertation reassesses the relationship between British national culture and the racial systems of British society since 1945 by presenting a history of British opera that centers nonwhite lives and histories. Rather than simply asserting a connection between British opera and Britishness, this dissertation emphasizes the institutionalization of opera under the auspices of the post-World War II British welfare state as a technology of national identity. In doing so, it responds to changes in British society that followed from unprecedented, large-scale migration of nonwhite people in the second half of the twentieth century from British colonies and former colonies in Africa, Asia and the Caribbean to the imperial metropole of mainland Britain. Stated differently, it situates the history of postcolonial migration to Britain as an integral component of British opera and British national culture, thereby bringing into conversation historical themes of the postwar and the postcolonial that have often been juxtaposed but rarely integrated. By revealing empire’s afterlife within the national institution of British opera, this dissertation calls attention to a widespread neglect of race in much of the scholarly literature on British opera and art-music, and it contributes a new understanding of postwar Britain’s national culture as a critical site of contestation over the meaning and significance of British national identity in the postcolonial period. This dissertation argues that a racial history of British opera helps illuminate and explain the centrality of race to the British nation-state and the historical processes by which the United Kingdom has been constituted in the postwar period as a modern racial state.