PALISSAGE: AN ALTERNATIVE TO MECHANICAL HEDGING IN VITIS VINIFERA VINEYARDS 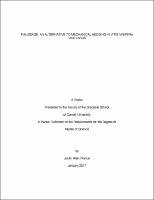 Hedging grapevines is a common canopy management practice in Northeast vineyards. Hedging can manipulate vine vigor, yield, fruit composition, wine quality, winter hardiness, and canopy microclimate. Although mechanical hedging is common practice in many vineyards, it is criticized as being a “Band-Aid solution” to vine vigor because it may stimulate lateral growth, resulting in a cycle of hedging and leaf removal that costs growers time and money. Palissage is an alternative canopy management tool where long shoot tips were tucked or wrapped horizontally along the top of the canopy. Anecdotally, growers report that palissage initiated earlier cessation of shoot growth during the growing season and the technique reduced or eliminated the need for leaf removal in the fruiting zone due to fewer laterals. Palissage trials were conducted on “Riesling” and “Cabernet Franc” (Vitis vinifera L.) in commercial vineyards in King Ferry (Finger Lakes region, New York) and Cutchogue (North fork of Long Island, New York), respectively. The trials at the two sites were randomized complete block designs, each with four replications. Three canopy management treatments were applied at King Ferry when shoots tips were 1 meter over the top wire: shoot tuck (ST), shoot wrap (SW), and hedging (Control). Two canopy management treatments were applied at Long Island when shoots tips were 1 meter over the top wire: shoot tuck (ST) and hedging (Control). In King Ferry, shoot tuck and shoot wrap treatments reduced the number of laterals per vine by 32% and 34%, respectively, when compared to the control (P < .0001). Shoot tuck increased yield per vine by 1.3 kg (P = 0.0041), rachis length by 1.4 cm (P = 0.0002), and TA by 0.7 g/L (P = 0.0236), when compared to the control. Shoot tuck and shoot wrap decreased disease incidence from 2.5% to 0.0% in 2016, when compared to the control. A sensory panel (n = 100) detected aroma differences between wines made from shoot wrap and control treatments. Palissage did not impact shoot length, shoot diameter, lateral diameter, or yield (P < 0.05) in Cabernet Franc at the Cutchogue site. Shoot tuck increased TA by 1.2 g/L (P = 0.0007) and increased YAN by 121.5 mg/L (P < 0.0001), when compared to the control. This study suggests that palissage may be a viable alternative to hedging however further research is needed to elucidate the long-term impact of palissage on vines and management systems.