Tales of Metabolic Regulation: Adiponectin in the Cow and Sel1L in the Mouse 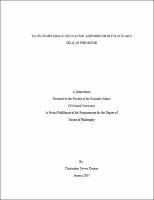 The first part of this dissertation assessed factors regulating the insulin sensitizing hormone adiponectin in dairy cows. Plasma adiponectin is reduced during the transition from late pregnancy (LP) to early lactation (EL) in parallel with rapid changes in the plasma concentration of metabolic hormones [i.e. insulin, leptin, and growth hormone (GH)] and non-esterified fatty acids (NEFA). The first study of this dissertation showed that none of these factors contribute to the regulation of plasma adiponectin. The second study tested the possibility that altered endoplasmic reticulum (ER) chaperone expression is involved. This was motivated by the following observations: 1) Plasma adiponectin variation in transition dairy cows occurs in absence of changes in adiponectin mRNA. 2) In rodents, the master regulator of ER homeostasis x-box binding protein 1 (Xbp1) regulates adiponectin production by increasing ER chaperone expression. We showed that Xbp1 expression decreased from LP to EL in the dairy cow. Using a primary bovine adipocyte system, overexpression of Xbp1 had no effect on adiponectin, despite increasing expression of several ER chaperone proteins. The factors regulating plasma adiponectin in the transition dairy cow remain unknown. The second part of this dissertation addressed the role of sel-1 suppressor of lin-12-like protein (Sel1l) in lipid metabolism. Sel1l is a critical component of the endoplasmic reticulum associated degradation (ERAD) system required for translocation and degradation of misfolded or aggregated proteins. Adipose-specific deletion of Sel1l in mice has implicated an ERAD-independent role for Sel1l in lipid metabolism. To this end, we generated liver-specific Sel1l knockout mice (ΔSel1lLiver) to assess whether Sel1l plays a similar role in lipid homeostasis in liver. Lipid metabolism was nearly normal in ΔSel1lLiver mice fed chow or high fat diet. ΔSel1lLiver mice on an atherogenic diet (AD) showed increased hyperlipidemia, hypercholesterolemia, liver damage, and occasional death compared to wildtype (WT) mice. This phenotype was associated with increased 3-hydroxy-3-methylglutaryl-CoA reductase (Hmgcr) and decreased low-density lipoprotein receptor (Ldlr) in liver of ΔSel1lLiver mice. Together, our results reveal a previously unknown role for Sel1l in lipid homeostasis in liver, but further studies are needed to elucidate the mechanism.