Subjects and Sovereigns: The Husbands and Wives who Ruled British India, 1774-1925 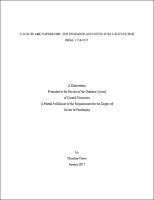 While men held the titles of governor and viceroy in British India, it was women who were responsible for cultivating and preserving the public image of these offices. This dissertation explores the evolution of domestic ideology in British imperial politics, popular culture, and historiography over the course of the long nineteenth century. Though scholars have outlined the ways in which domesticity was appropriated by the colonial and imperial government to maintain British sovereignty in India, no one has yet explored the ways in which Victorian domesticity became part of the identity of ruling elites, and how it was employed to help promote the empire to audiences in Britain. Focusing on the private correspondence of the governors’ wives, as well as popular biographies of these ruling elites which developed over the late Victorian period, this dissertation argues women helped to establish a viceregal celebrity centered on domesticity, and reinforced the patriarchal and racial hierarchies upon which the empire relied for its preservation. When this system came under attack during the 1857 rebellions, the vicereines, led by the example of Queen Victoria, helped usher in the new Raj by promoting domestic values, such as charity and wifely devotion, in their capacity as imperial figureheads. These wives also played a crucial role in imperial commemorations, as both subjects and authors, and helped to establish a new biographical genre in the late nineteenth century: the imperial domestic biography. These biographers turned to a particularly controversial governor of the early British Indian empire, Warren Hastings, and attempted to restore his reputation by recasting both he and his wife as an exemplary Victorian family. This revival effort represented the beginning of the end of viceregal domesticity, as the twentieth century brought the waning of the Indian empire and challenges to Victorian gender norms. This genre resurfaced in the 1980s, during a moment of Raj nostalgia, when biographies of the vicereines reappeared. It is time to reexamine the intersection of official and unofficial sources, politics and gender, history and biography—to acknowledge the roots of Victorian domesticity in British imperial historiography.